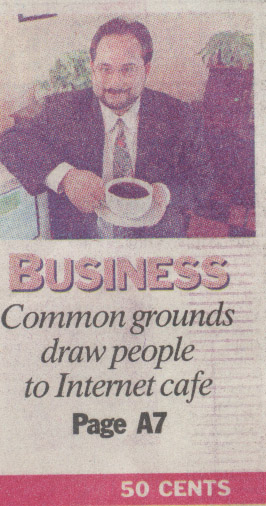 “We wanted to move to Williamsville because that’s where a lot of our clientele were coming from,” Scott P. Herman, the 28-year-old owner said. “That’s where there’s life.”

Herman admitted the old location, which opened in October 1995, had limitations because there was no walk-by traffic.

Since the new café opened a few weeks ago, “we’ve had more people walk by and stop in than we had the whole time at the other place,” said Beth Connell, the assistant manager.

Internet cafes attract “people off the street who are interested in bettering themselves,” said Jay Gerland, a programmer at Edge PC, a local organization that provides Internet training.

He does not see cyber cafes as competitors, however, because Edge primarily serves corporate clients rather than individuals.

“There is definitely a need” for Internet cafes, he said, adding that Buffaloians are very involved in the Internet.

Marc Silvestri, the president of a Buffalo-based Internet provider, Localnet, agreed. “The people in Western New York are very Internet savvy,” he said. “For as small as the city is, almost every business in Buffalo has a web site,” Gerland said.

Al, a first-time customer as Common Grounds Thursday night, said he thinks there should be more cyber cafes in the area, since he traveled from the town of Holland to surf the web after his home computer crashed. “I drove 30 miles to get here. Yeah, I think it’s a good idea,” he said. Herman has worked with computers since high school, and before opening the shop he was an autocad draftsman and a computer consultant. 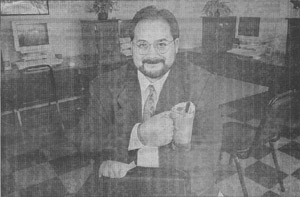 His vision for the business stemmed from his desire to offer a training center not only to teach people how to use the Internet, but to give them a place to practice.

As a teacher of basic computer classes at the University at Buffalo, Herman said he recognizes how critical practice is to learning. He thought providing a café would make people more comfortable and encourage them to come in and practice more often.

But the inside of Common Grounds looks different than many of the coffee houses around Buffalo.

The walls are off-white and relatively bare except for a few pictures and a clock Herman made from an old circuit board. The serving counter looks like something out of a science-fiction movie – it is made from an old mainframe phone system that Herman found as garbage left in a parking garage.

But what makes the interior unique is not the decor, but the four computer stations that surround the tables.

“It’s a little bit sterile, but it’s still comfy,” Herman said. “It’s not a hole in the wall. It’s not a college hangout, nor do I want it to be.” The clientele primarily consists of adults age 25 to 50 “who turned their backs on technology for a bit and technology flew by them and now they’re catching up,” Herman said.

He thinks the move to Williamsville will be profitable, despite the existence of several other coffee shops in the area.

“We’re kind of spread out. We’re not right next to each other,” he noted. “We’re different. Every café has its own environment and its own life.”

But Dylan Buyskes, the owner of Culture Coffee at 4402 Transit Road, Williamsville, said there is a danger of overcrowding.

He said two other coffee shops near his recently closed.

“The one that’s the most unique and the one that has the best atmosphere is going to win” Buyskes added.

“What we’re seeing now is a lot of them coming and going. Everybody’s just shuffling to make their mark,” said Dave Cosentino, the owner of Caffe Aroma at 5229 Main St., Williamsville and 957 Elmwood Ave. Both owners said they would not consider adding computers to their shops. “It wouldn’t fit in with what we have,” said Buyskes, who described his café as quiet and romantic.

But Herman said Common Grounds is also a place for couples.

“A lot of people bring dates here because with the Internet in front of you, you never run out of things to talk about.” He said.

In addition to the four computers available for public Internet access – at a charge of 16 cents per minute or $7.50 per hour – Common Grounds also has a training room with six computers.

The public can sample what is brewing at Common Ground today at a coffee tasting from 2 to 6 p.m. Coffee, cake and one hour of computer time will be offered for a $4.00 charge.

The café also helps people who are interested in buying a computer, but do not know how to use one.

We’re really putting the service back into the computer-service industry,” by providing the training necessary to operate a computer before purchasing one. Herman explained.

“The café is part of the community service,” he added.